Spain´s Hotel & Leisure sector breaks records year on year, but will it continue?

We believe that both the Spanish economy and the Hotel and Leisure sector will continue to be very attractive for investors and operators in the medium and long term. In comparison with the situation before the financial crisis, the hotel sector has reinvented itself now by professionalizing operations, adapting the products to meet international demand and standards; internationalizing the whole sector. The sustainability of this qualitative trend is more important than economic cycles or short term favourable conditions.

Sometimes, the unstable situation around the Mediterranean Sea is mentioned as the most important factor of the accelerated growth of tourism in Spain. Undoubtedly, the Spanish hotel sector is benefitting from this situation, however there are other key factors that are of equal or more importance:

Before the economic crisis that hit Spain harder than most other European countries, Spain had one of the most flourishing economies within the EU with yearly growth rates of the GDP standing between 3 and 4%. Optimism was the keyword and spending was never so high. People bought new homes and second homes and banks were eager to supply credits and mortgage loans at unusual conditions and margins, even to foreigners who wanted to buy a second home under the Spanish Sun.

This overheated economy stopped very abruptly after the first signs of a recession. The sale of residences decreased and the number of national/international buyers dropped dramatically, real estate prices went down and banks were confronted by “key-droppers” and real-estate developers and construction companies in financial trouble. Unemployment raised to 26% and amongst young people reached over 50%.

This had a huge effect on the amount of spending on holidays and leisure. Hotels focussing only on national tourism were punished.

The Spanish Government has put in place drastic measures over the last few years that on the one hand has resulted in increasing criticism from the Spanish population but on the other hand has resulted in a strong economic recovery. The country has the fastest economic growth of the medium and large economies within the Eurozone. Consumption is at a good level again and the real estate sector is growing very well.

Unemployment is still high however it stands 10% less than four years ago. The country is creating more jobs than most other European countries.

As was to be expected, the relatively new socialistic and liberal parties claimed an important part of the votes in the last elections, converting Spain into a modern multiparty democracy. It is still the Popular Party of Mariano Rajoy that is the biggest political party. He will continue to modernize the country but with more influence from the other parties. All in all Spain is considered a stable economy with more moderate but still sound growth rates.

The Spanish hotel-sector is living its golden years. Most of the important parameters are on green and it looks like this positive trend has not come to an end yet. During 2016 more than 330 million hotel nights were registered, 7.1% more than in 2015. A just over 65% of these hotel nights were booked by international tourists. More than 76 million international tourists visited Spain last year. 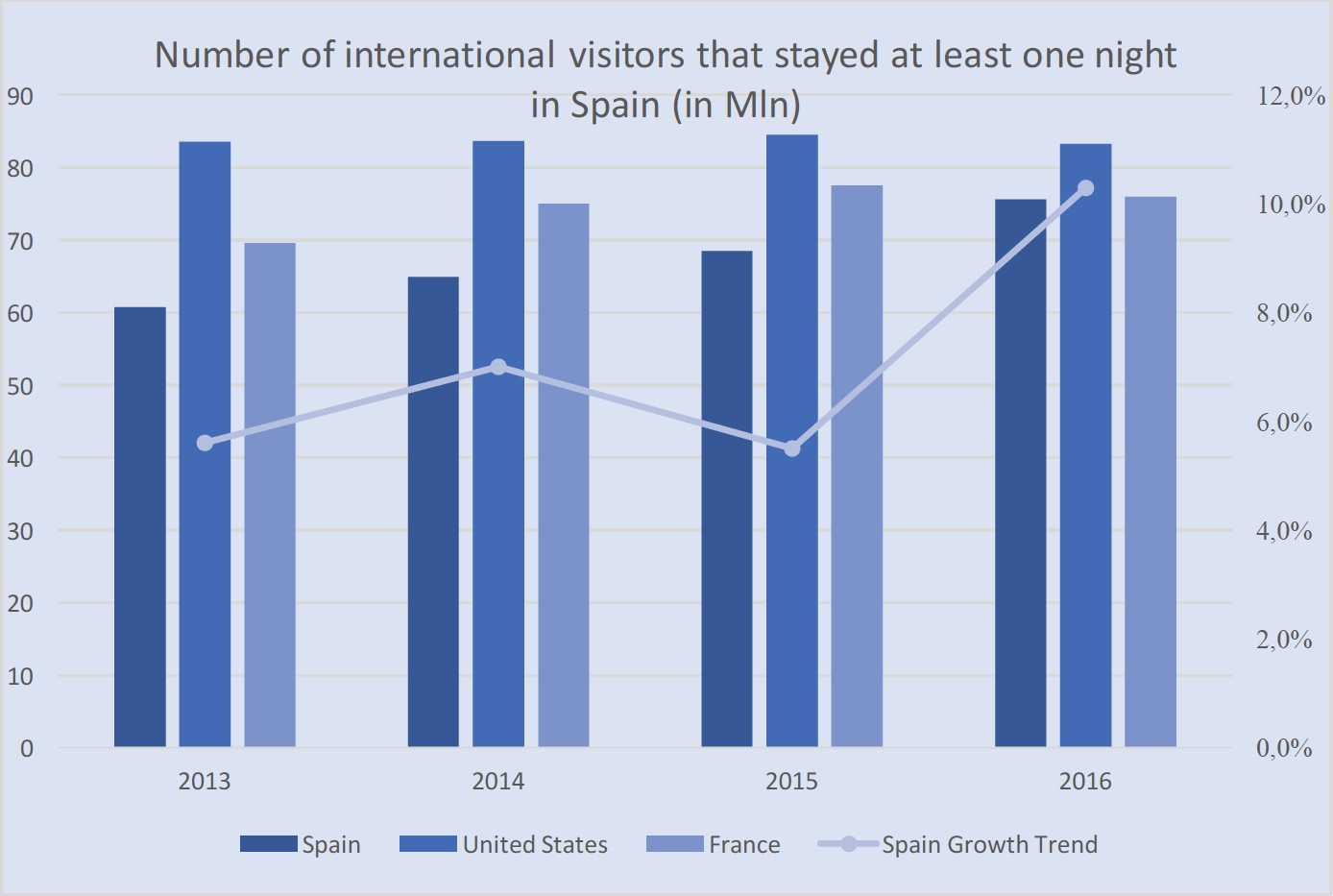 Occupancy rates rised sharply again and the average occupancy rate was 65.8%. The best occupation rates were registered among 4* hotels and at the Canary Islands, Barcelona and Balearic Islands. 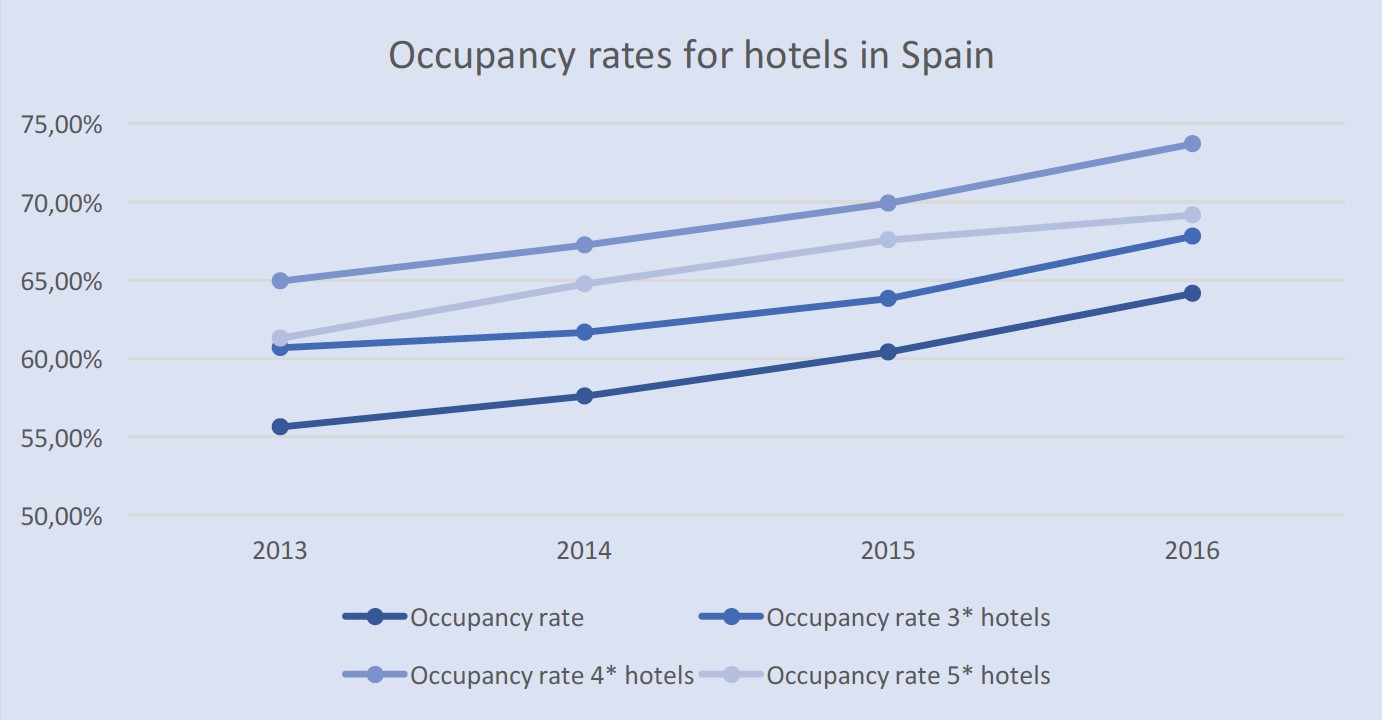 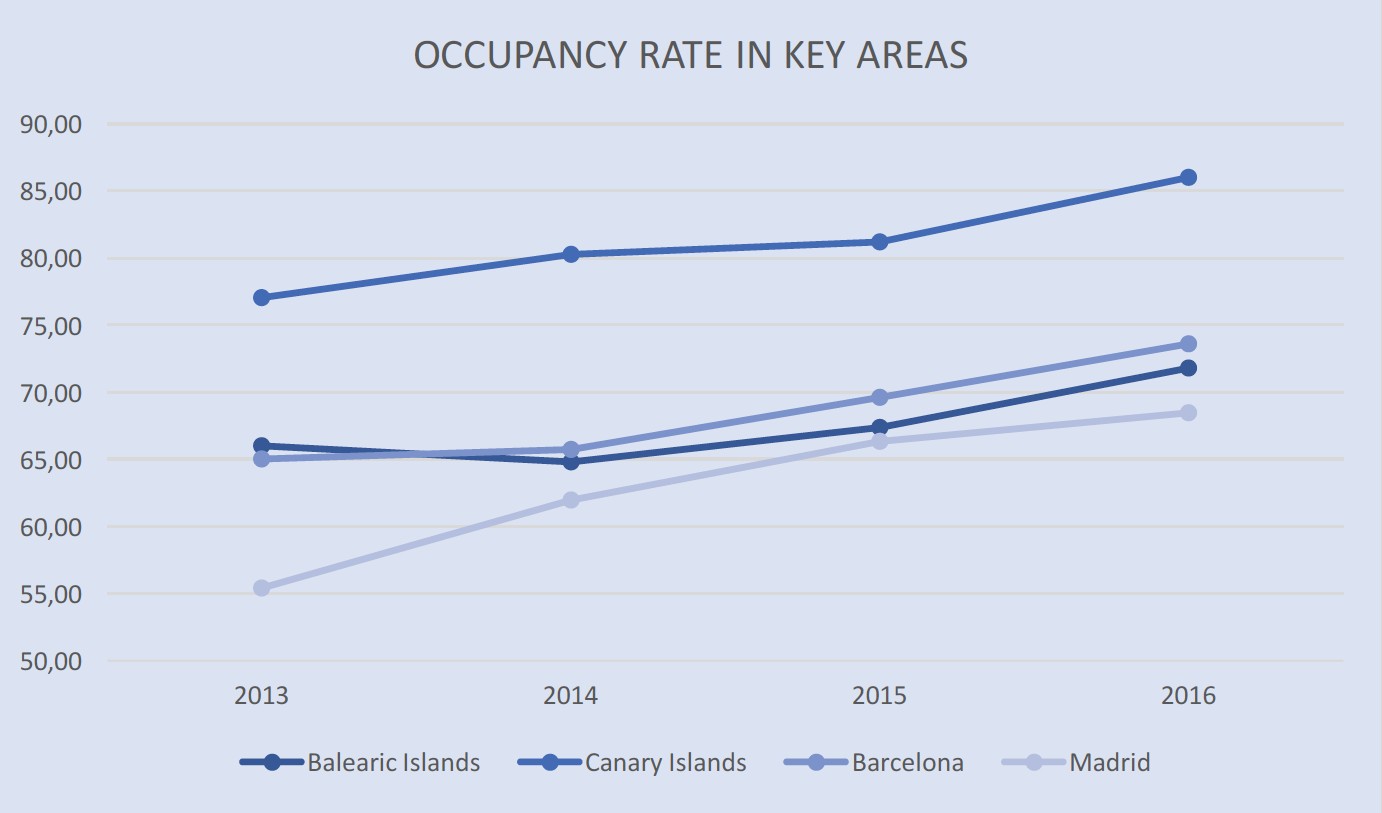 The Average Daily Rate (ADR) shows a more modest evolution with an exception for 5* hotels. We believe that here is where Spain´s most important opportunities lie.

The hotel sector has reinvented itself by professionalizing operations, adapting the products to international demand and standards, which has internationalized the whole sector. The sustainability of this qualitative trend is more important than economic cycles or short term favourable conditions. This will influence the ADR in the short and medium term

Especially Madrid has a great opportunity to improve its rates. A comparison with other European big city’s showed that hotel rates in Madrid are relatively low. This explains the interest of international hotel investors to make a purchase in this city. 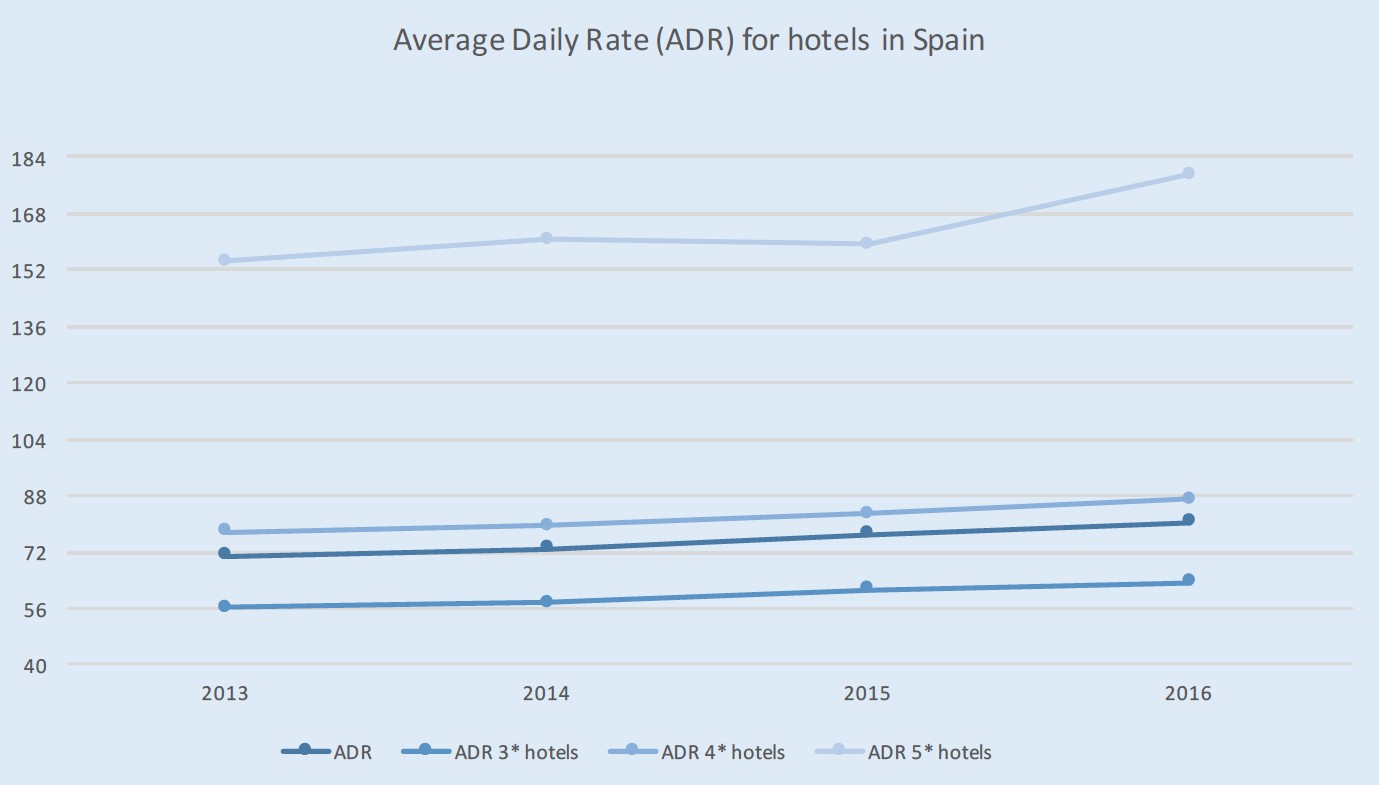 We are convinced that 2017 will also present itself as a very favourable year for hotel investors. The good fundamentals of both the Spanish economy and the touristic sector in combination with relatively low ADR’s, Revpar and interest rates will contribute to a sustainable and increasing income for owners. We do not think that a Brexit will influence tourist flows to Spain and therefore a possible impact on the sector will be minimal.

We believe there are several areas for investment opportunities that seem interesting
depending on the investment profile.

Kolibrie Investments is a corporate finance boutique specialized in the hospitality industry. Our clients are international investors, hotel chains, investment funds and private investors that trust us to discover investment opportunities in Europe with an emphasis on Spain and the Benelux Countries.

Also, owners of hotels and other companies within the hospitality industry that consider the sale of their properties find their way to us.

We combine many years of experience with an in-depth knowledge of the sector. We work in a disciplined way with maximum transparency for our clients.

Kolibrie is proud of its international team of professionals and has offices in Spain (Madrid) and The Netherlands (Rotterdam).